” Since 2000, the recognized on-line authority for everything associated with Red Wing Dinnerware!”

See the Lines  See the Patterns 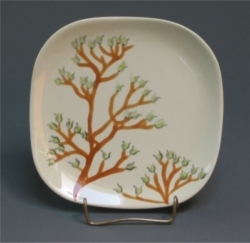 Red Wing had been producing the finest utilitarian stoneware items, using locally-sourced clay, since the late 1870’s.  In the mid-1930’s, the company decided to import a finer-bodied clay, and transform their ceramic production into art pottery and dinnerware.  The introduction of refrigeration some years before was eating into stoneware sales; they needed an alternative to boost sales and dinnerware fit the bill.

Initially, patterns were bright solid colors; later patterns were hand painted and some of the last patterns used stencils.   Dinnerware production numbers and sales were closely monitored, and as a result, individual patterns and pieces within a line were quickly added and dropped.

For a time, the Red Wing Potteries made special-order dinnerware items for customers such as Hamm’s, Diamond Jim’s and Sweden House.